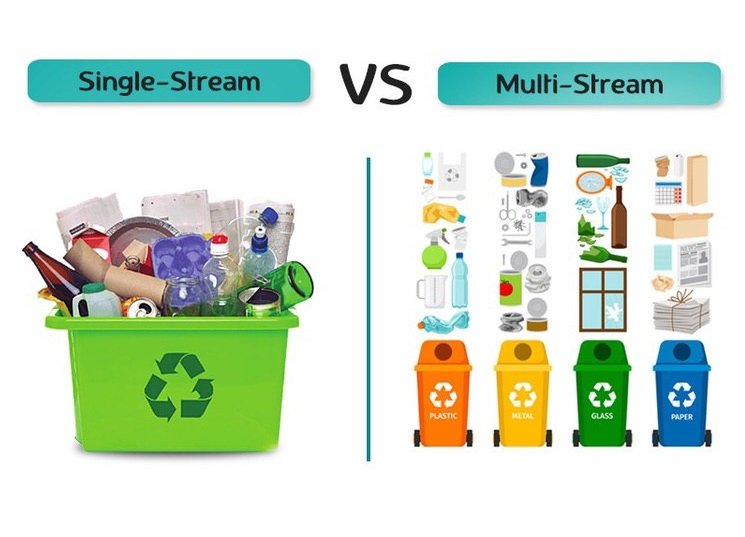 In case you haven’t heard of the controversy on single- vs. multiple-stream recycling, its kind of a big deal in the waste management industry. This post attempts at breaking down the concept for non waste experts.

The argument basically boils down to a simple question; should waste collectors provide a single bin for the collection of all recyclables or should separate bins be provided for each material.

Like every emotional being, I have my own personal views about this topic but here’s my attempt at impartially presenting both sides of the argument.

As the name implies, it encompasses collecting all recyclables with a single bin. The concept here is to make recycling easier for the general population by taking away the sorting responsibility and reassigning this task to the recycling facility.

— To recycle, you don’t have to be an expert in distinguishing paper from plastic or metal — that’s left for the experts to do.
— This makes the recycling process simpler and hence more appealing to a wider audience.
— Has been proven to result in an increase in the collection quantities.
— It helps municipalities cut their bin acquisition cost by 66%.

— Someone still has to do the sorting job so recycling facilities have to invest time, effort and resources to sort these materials

— This creates a barrier for new recycling facilities to enter the space — the required equipment are cost intensive.
— It turns out that separating recyclables from non recyclables is more complicated than separating plastic from glass so a lot more non recyclables end up in the single stream recycling bins
— Mixing translates to contamination, which results in increased wastage e.g. since “Glassy-plastic” is not yet a thing, in events where glass shards cannot be completely separated from plastic, both streams of plastic and glass will have to be eventually land-filled. As such, higher collection rate does not necessarily translate to a higher recycling rate.
— Recycling facilities end up being squeezed with little or no profits and this make the business less attractive for others.

Overall, this technique reduces the technical burden of the public, and financial burden of the municipalities, while increasing the overall collection rate of recyclables. However, it turns out that it also transfers all of these burdens to the recycling facility and does not necessarily increase the actual recycling rate.[1,2]

Again, the name says it all — implies providing multiple bins to collect different recyclable materials. In this case, the public is burdened with the sorting and therefore have to know the difference between materials i.e. plastic vs paper vs glass. By ensuring that these materials are sorted at source, recycling facilities can head straight to business once the materials are handed over.

— The technical and financial barrier for recycling facilities is lowered.
— Less contamination at source results in higher financial values of collected materials.
— Although this technique results in less collection rates, some studies have found it to also sustain equal or higher recycling rates (collection minus waste).
— Recycling facilities gain higher profits and this makes the business more attractive.

— The public is burdened with figuring out the difference between materials and sorting accordingly.
— Apparently, many people don’t like this burden so less people end up recycling.
— Less participation results in less social awareness.
— Municipalities have to spend 3x more on bin acquisition.

In a nutshell, this technique favors the recycling facility and has the potential to eventually result in a higher recycling rate. However, some of the financial and technical burdens are transferred to the municipality and the public respectively.

Based on this analysis, it is obvious that while municipalities and their residents prefer the single stream recycling technique, conventional recycling facilities tend to prefer the multiple stream option. There are also some outliers out there with some unconventional opinions of the topic.

Everyone falls under one of these categories — except you are Chuck Norris — and hence should have an opinion. Let’s hear yours in the comment section.